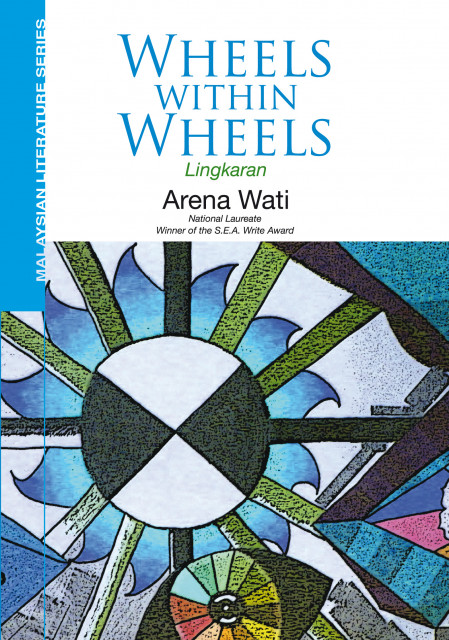 Wheels within Wheels formerly entitled Tumbangnya Pokok Tak Berlangit (Fall of a Man without Principles) won the award for literary merit in the novel-writing competition sponsored by Dewan Bahasa dan Pustaka in 1962.

Wheels within Wheels is among Arena Wati’s best works which discusses in detail several questions and confronts the dilemma faced by Malaysia with its multiracial compositions, culture, religion and differences in standards of living. Besides the question of interaction and relationship among the races, Arena Wati too focuses upon issues pertaining to the country’s development especially the Malay issue and internal problems which hamper the development process in the country.

The main characters and the supporting roles in this novel such as Franken, Hess, Foo Seng Kow, Arumugam, Talui, Ramli, Munah, Zaleha and others interact with one another to debate the problems of life, welfare and the interests of each other. At the same time matters connected to problems of relationships between the races which are included in situations encompassing suspicion, conviction, hope, love, marriage, greed and the downfall of a family are conveyed in a manner that is gripping and convincing.

Wheels within Wheels is just one of Arena Wati’s many other novels such as Sandera, Bunga dari Kuburan, Kuntuk Tulip Biru and Sakura Mengorak Kelopak, which caught the attention and critical review of critics and scholars inside and outside the country including Prof. A. Teeuw.